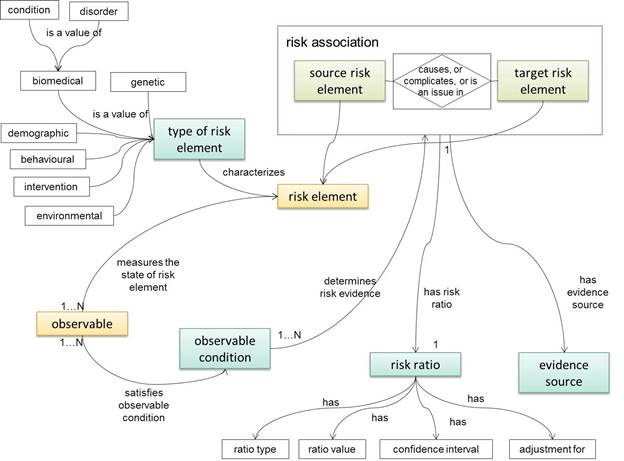 The core of CARRE functionality revolves around the concept of comorbidity, and in particular comorbidities in the case of cardiorenal syndrome. From the overview of the medical domain presented in the CARRE Deliverable D.2.1, it is evident that cardiorenal disease and comorbidities is a complex domain. Related conditions do not have a single cause, but medical evidence suggests that there are multiple causal chains. In order to capture this, the CARRE conceptual model is presented as a complex network of risk factors, that is pairs of conditions related to one another via a (apparently) causal associations.

The core concept in the CARRE model is the risk association, directly related to the medical risk factor. Primary concepts and their relationships are:

Risk Element: A risk association defines the (often causal) association of an agent (source risk element) to a health outcome (target risk element) Risk elements include all the disorders/diseases involved in the comorbidity under discussion as well as any other risk causing agent.

Risk Association: The association of one risk element as the risk source with another risk element which is the negative outcome under certain conditions is a ‘risk association’. This association is a rather complex one and is characterized by a number of other concepts, namely: association type; risk ratio; observables condition (which involves one or more observables); and evidence source: i.e. scientific publication.

Observable: This includes all the biomarkers and other measurements which define with their values the conditions under which a risk association is formed between two risk elements.

Detailed attributes tables for each concept are discussed in CARRE Deliverable 2.2 available from the project website.